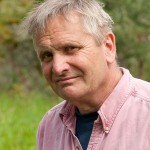 Rusnak Gallant principal Illarion Gallant has been a practicing professional artist since 1988. He has successfully completed many large scale, site specific, outdoor urban sculpture pieces. The work, highly symbolic, references the connectivity between evolution and the interaction of urban fabric, contemporary landscape and the human passage through the resultant synthesis. Gallant’s work is in Toronto, Calgary and Victoria.

The defining moment of Illarion’s pursuit of large scale work was in 1984, when he participated in the Lindabrunn Stone Symposium in Lindabrunn Austria. Lindabrunn was establishing itself as a cross cultural symposium event through the invitation of influential international land artists from countries behind what were then “The Iron Curtain”, Germany, Austria, Japan, Canada and The United States. Participation in the symposium was Gallant’s seminal moment where he was enlightened by the divergent possibilities of entwining sculpture in concert with the landscape.

In the context of landscape, Gallant prefers the contradictory textures of materials to create his hardscape palette. His juxtaposition of natural rock, dressed stone and concrete create a visual strength of mass, line and texture which establishes the required visual authority against which the softness of the planted landscape riots gently with equal force.

Most recently Gallant has been the successful proponent of public art competitions in Victoria B.C. Thematically his work blends the historic, urban and pedestrian site contexts which are the pivotal influences he uses to integrate sculptural shape, form and texture.